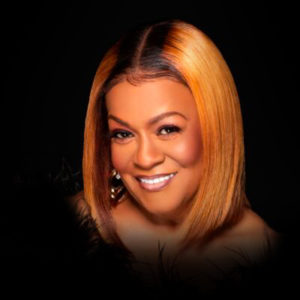 Jacky Clark Chisholm is the first-born daughter of the late Dr. Mattie Moss Clark, legendary innovator of the modern gospel choir. Jacky and her younger sisters make up the award-winning gospel-singing group, The Clark Sisters, changing many lives by their classic inspirational performances, including "You Brought the Sunshine" and "Is My Living In Vain.

Jacky is a 3-time Grammy winner, NAACP Image Award winner, Stellar Award winner and Dove Award winner. She earned a nursing degree while keeping up a busy schedule with the Clark Sisters. Professionally, she has been an instructor for the American Red Cross and also has a bachelors degree in Family Life Education.

Following up on her degree in nursing, Jacky hosted her own radio show called "The Wellness Touch" in 2003. She would interview healthcare professionals and they would answer questions from listners that called in.

Her 2005 CD "Expectancy", was her first solo recording project. Her second solo project is scheduled for release in 2015. "My first project gave people space to reflect on God from their own personal point of view," Jacky explains. "The new project will present me in a light people won't be expecting. It's not always about the music, but it's all about the message."

As a performer, she had starring roles in six gospel stage plays that toured nationwide including "Mama Don't", the 1990 Mike Matthews play that started a whole new genre of Gospel musical stage plays. In 2014 she produced her own play again with playwrite Mike Matthews called "Ain't Too Proud To Beg". In 2015 she appeared with Vivica A. Fox in Mike Matthews' production "Danger At My Door". She has also been seen in a New York Life Insurance television commercial and heard in radio commercials and announcements.

Jacky's book "Inspirational Praise" has been well received. It is 30 days of reflections observed by Jacky based on her personal experiences on a variety of issues. It is formatted as a journal, which allows the reader to write their own thoughts and prayers related to their own experiences. The journal is accompanied by a cd of music for meditation composed by Jacky's cousin, Bill Moss, Jr. Her second book, "Polished Image: Making the Most of Your Public Persona", is soon to be published. It will help aspiring artists develop skills for proper appearance, stage presence and off-stage behavior.