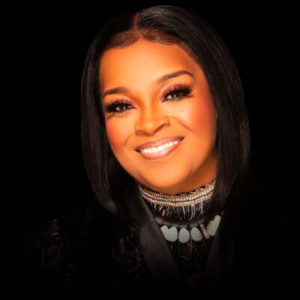 Four-time GRAMMY® Award-winner and multiple Stellar and GMA Dove Award winner Karen Clark Sheard is a vocalist, songwriter, entrepreneur, wife and mother. She is also a gospel music legend and a part of a musical dynasty. Admired by a wide range of vocalists from various genres, Clark Sheard is renowned throughout the music industry for her signature, one-of-a-kind multi-octave vocal range and ability. Her musical style with the legendary Clark Sisters and as a solo artist has inspired a host of today’s brightest pop divas including Beyoncé, Mariah Carey, Missy Elliott, and Faith Evans, among countless others.

Clark Sheard also is a partner in ministry with her husband, Bishop J. Drew Sheard, Pastor of Greater Emmanuel Institutional Church of God and Christ in Detroit, MI, where she serves as first lady. In September 2014, hosted her hugely successful inaugural international empowerment summit for all women, with special focus on women in ministry leadership, titled “Lady Karen Clark Sheard Presents: Ladies 1st A Celebration of All Women” in Virginia Beach, VA. This blessed ministry endeavor debuted to 1,500 women+ and plans to be an annual event.

For Clark Sheard, it’s all about family. In fact, family has always been central to her success as one of music’s most gifted and admired vocalists in American Contemporary music. It started when, as a child, Clark Sheard was trained to sing by her mother, pioneering gospel choir director and gospel music icon Dr. Mattie Moss Clark. It has come full circle with her 23- yearold son, producer and musician J. Drew Sheard II, producing tracks on her previous and forthcoming albums, which she recorded for Karew Record, a family-owned label. Her daughter, award-winning gospel music sensation Kierra Sheard also records on the family label.

Clark Sheard’s current Grammy nominated hit single, “Sunday AM” (pronounced as “Sunday Morning”) is produced by multiple award-winning producer Donald Lawrence. The new album “Destined To Win” will be released 2015 through the label’s partnership with Entertainment One Music (eOne Music).

Those family values are on full display in BET’s docu-drama series, The Sheards, which premiered on the network to high ratings on April 7, 2013. In the show’s dramatic first season, Clark Sheard reveals her struggle to juggle being a first lady, gospel superstar and doting mother. During the series, Clark Sheard continues to support her husband and help guide her children—Kierra and J. Drew II—in the right direction as they branch off into adulthood. At the same time, she is trying to reinvent her own career. The second season of The Sheards is slated to air in the near future.

Bishop J. Drew Sheard and Karen Clark Sheard established Karew Records in 2009. “This had been a dream of mine for seven years,” she says of the family enterprise. “We’ve been blessed to have good relationships with many record companies, but over time I wanted more control over the music-making process. Now God has given me this great opportunity and we have two wonderful partnerships. I have my family on my record label, as well as praise and worship leader David Daughtry, but I’m going to be reaching out to young people to help them pursue their dreams too, because there are so many talented artists out there who have not been heard yet.”

The label’s first release was Clark Sheard’s All in One (2010), a CD of urban-flavored gospel, which was her first album in four years. The label has also released The Clark Sisters’ Family Christmas (2010) and daughter Kierra’s fourth album, Free (2011). Most recently, the label released self-titled worship cd(2014) by new artist David Daughtry, the only artist currently signed to the label outside of the family.

“My husband has not only supported my dreams, he has worked to make them come true,” says Clark Sheard. “It’s like God hasn’t forgotten about us and is continuing this legacy that started with my mom.”

Mattie Moss Clark formed her five daughters into the Clark Sisters when Karen was barely a teenager. In 1973, they recorded their first album, Jesus Has A Lot to Give. In 1983, their signature song, “You Brought the Sunshine,” from the album of the same name, became a smash hit—as popular on dance floors as in churches—peaking at #16 on the Billboard Black Singles chart. Over the years, the sisters have recorded 20 albums, including GMA Dove Award-winner and GRAMMY® Award-nominated Heart and Soul (1987) and GRAMMY® Award-nominated Conqueror (1988) and Sincerely (1983), while crafting enduring gospel anthems such as “Endow Me,” “Pray for the USA,” “Name It Claim It” and “Is My Living in Vain?"