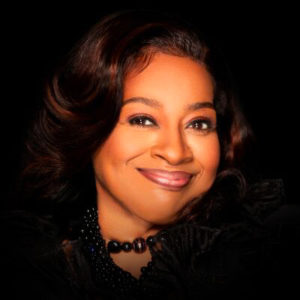 A musical genius. The maestro. Gifted musician and anointed vocalist, a true worshipper. These are all accurate descriptions of Elbernita “Twinkie” Clark, the woman considered the heart and soul of the Clark Sisters. In many respects, she has been the creative force in shaping the vibrant sound that has become the Clark Sisters hallmark (more affectionately known as the ‘Clark Sound’). In the history of Gospel music, she has quickly become a legend in her own right. With the reverence of a vast array of audiences, critics and peers, she is considered by many Gospel aficionados to not only be Gospel music’s greatest, but also the undisputed “Queen of the B3 Hammond organ.”

Twinkie received her formal musical training at the prestigious Howard University in Washington, D.C. and went on to faithfully work in the Lord’s vineyard, creating some of the most memorable hits available today for herself and her siblings. With Twinkie’s musical gifts accompanied by the vocal talents of her sisters, all made possible under the favor and anointing of God resting upon each of them, together they’ve acquired worldwide superior accolades including a gold record in 1981 with “You Brought the Sunshine,” their bonafide hit on the Gospel and R&B charts and their long-awaited induction into the International Gospel Music Hall of Fame in 1999. Most recently, The Clark Sisters received high honors at the 2007 Stellar Awards when they were presented with the coveted award for Most Notable Achievement.

In addition to being the chief songwriter and producer on several albums with her sisters, Twinkie has produced solo albums for her mother, the equally legendary late Dr. Mattie Moss Clark, who she credits as her “greatest inspiration” and the start of her musical journey. Twinkie has also produced albums for several choirs and traveled the world abroad as an evangelist, workshop facilitator, music educator, singer and a powerful woman of God. She has had her compositions recorded and sampled by some of the Gospel greats and even secular artists such as Rev. James Cleveland, Jennifer Holliday, Al Green, James Moore, Donald Lawrence and the Tri-City Singers, Esther Smith, James Moss, Shirley Murdock, Kelly Price, Coko, Dave Hollister, Out of Eden, Xscape, Aaliyah and Mary J. Blige.

Amid her travels, networking and the lending of her songwriting and production expertise to others over the years, Twinkie found the time to record and release a catalog of successful solo albums: Praise Belongs To God, (1979), Ye Shall Receive Power, (1981), Comin’ Home (1982), Masterpiece (1996), and Live In Charlotte (2002). Twinkie's third album on Verity Records Home Once Again...Live in Detroit, released in 2004, proves yet again that she merits every accolade afforded to her. She is also the featured artist on a compilation disc of her own hits entitled Twinkie Clark: Praise & Worship, which hit stores in 2006.

Twinkie’s musical prowess is evident in the delivery of her heartfelt lyrics blended with and based on scripture. “When we were younger, Twinkie would always have her bible and notes with her,” says Dorinda Clark Cole reflecting on the early years of singing with her sisters. “She would put it on the piano and say, “Follow me.” And it would be so amazing how she’d use the word of God and us to pull those songs together.” Often filling in for her sisters in many of their intricate vocal arrangements, Twinkie developed a broad range from soprano to low contralto and even bass. Her churchy “squalls”, improvisational skill and signature lead vocals appear to have set an unprecedented vocal standard for others to strive to achieve in the years to come.

“I see myself as a vehicle, a vessel being used by God, having purpose, and yielding to God,” says Twinkie. She has understood the ministerial calling on her life from a very young age. Musically, she has been labeled a Gospel Legend, and it's a title of which feels worthy. Her mother also garnered the title for her career. Twinkie says she believes that she herself is a legend because her mother was a legend. “And I wanted to be just like her,” says Twinkie. “And also because of the experience and awards. Yes, I am a Gospel Legend.”